Adii and Ben catch up to discuss where they’re feeling stuck on their business-building journeys. Adii is feeling stalled on the product front, and feels that the timeline isn’t moving as fast as he would like. Meanwhile, Ben is torn between two different paths his product could take - the path that was first intended, or a new use case currently being tested by one of his customers. He’s left craving the answer to the important question: what clear problem can 1-Click Pony help solve?

Adii realizes that his product timeline will be delayed due to a need to incorporate forecasting.

“The tricky part is probably on the product front. In the last week or so we've definitely realized that the one part of the kind of first version that we're putting out there includes forecasting. And there's definitely more that we need to do there. I thought kind of a solid kind of first version was going to be quicker to achieve, and we'd be able to kind of improve from there. It's evident that even in this early stage, and we've seen that with part of customers already, there's more work that we need to do there. And that gets me into that kind of spiral of we're not fucking moving fast enough. Why are we not moving fast enough?”

Adii is ready to fill several open positions as Cogsy prepares to take the next step with their pilot customers.

“I've got a bunch of open positions. I'm hoping to build out the engineering team at this stage, both kind of your back-end and front-end stuff. So the aim is to get another two or three bodies into the door, especially now that the capital is there, to really take this first - and it's not even a fully first version yet. But I now I have very clear clarity in terms of where we are at with those pilot customers and what we need to do in the next, say six to eight weeks on the product side.”

Adii turns his focus to two main items. The first is building an additional feature that he hopes to nail within the next two months.

“There's probably two big buckets of things that we need to do here on the product side. One is building an additional feature to take all of the preservation and forecasting that we do and literally turning it into a turnkey kind of solution, where it would literally show you a purchase order for the merchant. And you would literally just be able to review it and you can click ‘yes’ and we would send it off to your manufacturer/supplier or print a PDF or export to CC, whatever that looks like. So that bit of it is probably the easier and more obvious part. Six to eight weeks is definitely enough time to to nail that, both functionally and in terms of the kind of UI/UX there.”

Adii feels that a big tipping point is around the corner, whether it comes weeks from now or months from now.

“The part that I'm not that sure about at this stage comes down to the forecasting, and getting the forecasting to a point where we are confident enough about it to tell merchants...Forecasting is an estimate, right? So machine learning, it's going to take time to refine it. Like one of those things are true and we're not aiming for perfect answers with that either. We're aiming for X percentage improvements in terms of how you use your working capital...It might be a case that in a week or two’s time there is a big tipping point, i.e. discovering like we just needed to flip that switch and then things start improving dramatically. Or it might be this complete exploration of another three months before finding that big switch.”

Adii describes the feeling of delivering value to customers versus labeling clients as early adopters.

“As you take us out of that realm of, yeah, I have to have a discussion with the customer and say, ‘this is probably what it's worth. I know it's not fully finished just yet, so we're going to discount that.’ So meaning that six to eight weeks in your timeframe here is to have a sales conversation and just say, this is the price. This is not you being an early adopter anymore. This delivers true kind of value. It's been tried. It's been tested by part of the customers. Please pay this invoice right now.”

Ben described his two biggest clients - and how they are using his service in two very different ways.

“We have two pilot customers who've been using the pony and I've seen two fairly different use cases. One's a fashion retailer who has been using the pony for a year. And they use it in the way the pony was originally sort of intended. We'll call it rightly or wrongly. And with this new customer that we're working with, part of what's been interesting is what we found was, and so this is the idea here is how do you remove friction between someone receiving an email and buying the product. And so what we had was effectively an opt-out purchase. Where the idea is the person already trusts you. They already know you. They know what they want. Let's eliminate steps. And that's what the fashion brand’s been using for the last year. With this new brand, that is I'd say substantially larger in size. But they also just have a different product. And what we found was 60% of people who were clicking on their emails weren't actually buying the product that was featured in the email they were going into. They were using the store as a gateway to buy something else.”

Ben is experimenting with a new 1-click use case where customers can choose from an array of best selling products.

“A lot of people who were opening and clicking on the links weren't trying to buy the product that was featured in the email. So basically like you have two options: one of which is list a bunch of products in the email, which would change their email format that they've been doing for years. Or we can come up with a different way of doing it. And so what we came up with was effectively an opt-in purchase instead of an opt-out. Where what happens is you click on the email or you click on the hero button...it loads the page where it adds the product to the cart and then lists like the top best-selling products below that with check boxes so that the customer can uncheck the featured product if they want, and then check these additional products or any of these additional top 10 products.”

Ben assumed the new tactic would increase AOV - and was pleasantly surprised when conversion rate went up too.

“The assumption here is that it might reduce the conversion rate, simply because it's adding an additional step. But you're increasing average order value because now you're buying multiple products at the same time. And actually truthfully, because so many of their customers weren't buying the product that was featured in the email, it would increase conversion rate. So we rolled that out, we’ve run it with a few of their campaigns. Again, ran it through the statistical analysis machine. And the results have been really good. It's increased average order value by nearly double. Conversion rate is up as well.”

Ben is happy to help his client succeed, but wonders if the solution will work for more merchants and a greater subset of users.

“I find myself struggling a bit with the concern that is this just a situation for this one merchant? I mean, when you explain it, it makes a lot of sense that it would be valuable. But my concern is, are we going down, how long is our string? And right now we're doing with a subset of their customers. So I think for this to really be meaningful for us as a business, we need to roll it out to more users.”

18:50 - Positioning and messaging can change

Adii reassures Ben that he shouldn’t get too hung up on positioning, since messaging is easy to update. All that matters is finding customers.

“The positioning on Cogsy are common at this stage. It's shit. Like I 100% know that's not the thing that resonates. It also doesn't matter that much right now. It's not prevented us from raising capital or getting those early pilot customers and making that progress. The way I think about the value prop here, at least from a communication standpoint is, you just evolve it, right? It's a website. Update an H1 of text if it doesn't work. Like that part is not that hard. Like you could probably too just this kind of conversation, with the experiment we ran, it increased AOV, right? Like just say that. ‘Hey, here's a SMS based tool that increases your AOV.’ Simple...what I would do is put something out there. And it just needs to be good enough not to make the sale, just to get on a call with someone. And then you can totally give them the less clear picture. Which is still, Hey, for some people this increased AOV, might do this, it might do that whatnot. But you really want to have those conversations.”

Ben is eager to get more eyes on his product and have more conversations with merchants who can provide insight and direction.

“95% of the struggle right now is just lack of clarity around the problem you're solving or specifically the job to be done or the workflow that we're solving today for people. Then the next part is, what can I be doing on a daily basis beyond that to get people to be finding, coming across that marketing page, that landing page. And that's where the LinkedIn posts come up for me. And I think what I've been trying to figure out in part has been well, what do I post there and how do I approach getting more targeted eyes...When I have a clear problem to solve, I'm really fucking effective. Which I think is probably true for most people. The issue I'm having, especially as in part, because I'm not an e-commerce merchant is putting myself not just hypothetically in their shoes, but becoming friends with more merchants who were talking to me, explaining what their struggles are.” 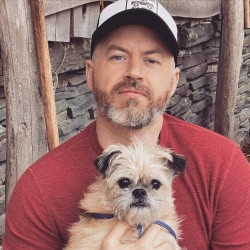